These aliens represent an unnamed race of peculiar-looking humanoids. 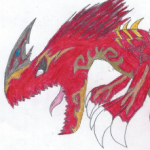