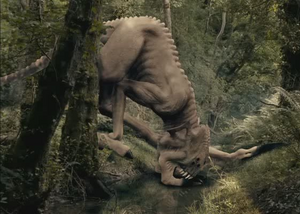 The Beasts from Parallel Dimension, otherwise known simply as the "Alien", is a non-sapient species which inhabits an unnamed parallel dimension.

Beasts from the Parallel Dimension are slender and have tan skin and three pairs of black eyes. Their internal fluids contain large quantities of ammonia. They've been shown to be oviparous, and are highly protective of their nests.

Retrieved from "https://aliens.fandom.com/wiki/Alien_(Ferocious_Planet)?oldid=183823"
Community content is available under CC-BY-SA unless otherwise noted.