Alien Species
Register
Don't have an account?
Sign In
Advertisement
in: Earth vs. The Flying Saucers Universe, Unnamed Species, Ancient Species,
and 13 more

Alien (Earth vs. the Flying Saucers) 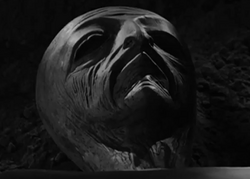 Earth vs. the Flying Saucers

This unnamed humanoid species were almost entirely wiped out by the destruction of their solar system, with their last members being killed in a failed attempt to occupy Earth.

Most of the aliens' biology is unknown, but it is known that they are humanoids who bear at least some resemblance to the classic Grey. Their heads are hairless with flat noses, perpetually frowning mouths, large, dark eyes, no external ears, and thin, wrinkled greyish-brown skin. However, the aliens who were seen by Humans had artificially prolonged their lifespans with life support suits, so it is possible that their natural appearance is different from what was seen when unmasked, such as not being as thin or wrinkled. When killed, their bodies would soon dissolve into nothingness, although this may also be due to the strain put on their bodies from their extended lifespans.

The aliens were known to be emotionless, seeking another habitable planet to relocate their species to after their system's destruction, and willing to turn to lethal force to coerce planets into letting them occupy it. They saw Earth's space-related technologies as primitive, and due to their emotionless nature, had no remorse in causing widespread destruction on Earth.

The aliens achieved highly advanced technology, utilizing flying saucer-shaped spacecraft capable of crossing solar systems. These ships have cylindrical landing gear, and can project a forcefield around the ship's immediate area, which is impervious to Earth's ballistic weaponry. However, the forcefields are not completely solid against physical objects, allowing slow-moving physical objects to pass through it, such as the aliens, who can walk in and out of the protective field. Internally, alien spacecraft contain a round, central chamber, often used to hold prisoners, and sports several viewing windows around it. In addition, a glowing flower-shaped device known as the Infinitely Indexed Memory Bank can descend from the ceiling of the ships, allowing them to both translate other languages with a somewhat distorted robotic voice and extract information from the brains of other beings. Notably, alien ships generate a magnetic field stronger than that of Earth, using it as a sort of reactionless drive, which has a side effect of making time within their ships speed up relative to time outside. For instance, the time it takes for a heart to beat once is equal to several minutes within the ship. Alien weaponry include disintegration rays, capable of vaporizing multiple targets, including large machinery, in a single shot. On spacecraft, these guns resemble satellite dishes. Alien scout probes resemble small, glowing metal orbs that fly, transmitting through unseen optics, but are vulnerable to ballistic weaponry.

Another form of notable alien technology are their life support suits, which are capable of keeping them alive for extended periods of time, far beyond their natural lifespans. The suits are entirely smooth, with bullet-shaped, featureless, and opaque helmets, which appear incapable of turning. Their helmets effectively function as glasses and hearing aids. Strangely, although the suits bear visible joints for their shoulders and pelvis, they lack any elbow joints. While appearing to be made of metal, the alien life support suits are actually solidified electricity, and are very light, with the helmets only weighing a few grams. They are armed with a disintegration ray built into their hands, with the same power as the rays on their ships. Despite their incredible advancements and destructive capability, their suits can be penetrated by small arms fire, although they can resist extreme temperatures and other forms of damage.

At some point in the distant past, the aliens' home system was destroyed, forcing them to flee. They encased their bodies in life support suits made of solid electricity, and sought out a new planet to live on. Finding Earth, which had conditions habitable to them, the aliens began directing their fleet to Earth. After arriving in the mid-20th century, they were sighted across the globe as they scouted out the planet with both their ships and their drones. The US Air Force documented the alien sightings, soon giving the order to fire on the saucers on sight, even though the aliens were quite elusive. Shortly after arriving, an alien ship flew over Dr. Russell Marvin and his wife Carol while they were driving to a US military base, attempting to communicate with him, sending a message that they would meet with him the next day, although Russell was unable to understand the sound from the ship, as it was accelerated. The ship flew off before Russell could get an image of it, but he was able to record the sound, as he had been recording his audio log. Meanwhile, the aliens detected US satellite launches from Project Skyhook, assumed they were some form of weaponry, and shot the rockets down, although they soon found that the satellites were merely meant for communication, and quite primitive compared to alien technology. General Hanley, Carol's father, got word of the satellites being shot down, and attempted to relay the information to Russell. However, he was unable to stop the next launch, which was promptly shot down by the aliens.

The next day, Project Skyhook readied to launch their last satellite, equipped with camera equipment to record what was happening in space. However, before the satellite could launch, an alien ship was sent to the base, sighted by the base personnel and General Hanley as it came in, with the base's phone lines soon being cut off by the aliens. It landed just outside the West Tower, generating a forcefield around itself and deploying aliens. Soldiers soon arrived on the scene, killing the first alien that left the forcefield. However, the other aliens remaining within the field, and quickly disintegrated the soldiers.

Once the area was clear, the aliens retrieved their dead comrade and destroyed the satellite's rocket, proceeding to destroy more of the base's equipment, rendering the air toxic and killing almost all other personnel, aside from Russel and Carol. With the launch site in ruins, the aliens departed into space, but not before taking General Hanley prisoner. Aboard the ship, the aliens used their translator device to speak to Hanley, explaining that they did not expect to be met with hostility after contacting Dr. Marvin, as they thought that the transmission would've been deciphered by then. After General Hanley refused to continue complying, the aliens decided to extract information from his mind. Meanwhile, on the ground, as Russell's recording device's battery died, he replayed the sound of the saucer, which was slowed down due to the low power, allowing him to finally understand what the aliens were saying.

After Russell and Carol were rescued, they took the recording to the Pentagon, where the alien transmission was brought to the government, and Russell resolved to meet with the aliens. In secret, he managed to contact the aliens using the same frequency they used. The aliens arranged a meeting with them at 6 A.M. at Chesapeake Bay. Russell managed to get to the bay with Carol, a military officer named Major Huglin, and a police officer in pursuit, arriving just in time for the ship to land. All the Humans were taken aboard, where the aliens took off with them, revealing the time-accelerating principles of their ship, and that they were the ones who shot down the satellites. The aliens also explain that they chose to speak to Russell because he was a scientist who studied space, proceeding to explain their origin and that their ships continue to circle the globe. The aliens then asked him to convince all Earth leaders to meet with them in Washington D.C. to negotiate the alien occupation of Earth, showing him images of a US Navy destroyer being vaporized by an alien ship as a warning of what would happen if their demands are not met. When questioned, the aliens explained that they will not launch a direct invasion due to the fact that a prolonged war against Earth would likely render the planet uninhabitable, and thus useless to them. Then, when questioned again, the aliens used General Hanley, whose mind was under their control, to answer questions pertaining to the history of the United States. The aliens then reveal General Hanley, who appeared in a trance-like state. The police officer then pulled his gun and fired on the aliens to no avail, only for the aliens to take over his mind as well. Giving Russell 56 days to arrange the meeting and the coordinates of the destroyed naval craft to present as proof, they let the Humans go, minus General Hanley and the officer.

Although the incredible power of the alien armaments frightened Russell, he was able to come up with an idea for a weapon that could counter the alien ships by disrupting their magnetic fields, using the knowledge of the ships' properties he got from his meeting with the aliens, working for some time as the remaining days elapsed. An alien scout probe attempted to observe the Humans as they built the prototypes of the weapon, but the probe was soon destroyed by Major Huglin. Russell and his companions attempted to escape the lab with the weapon, entering the woods outside the lab, but were quickly pursued by an alien ship, the same one holding General Hanley, which landed and deployed alien troops. Managing to get the weapon active, Russell made the ship wobble on its landing gear, but was unable to get enough power to bring the ship down. Despite the disruption, all but one alien reentered the ship and took off, distracting Russell and the others. The remaining alien walked over to the truck where the gun was mounted, finding a scientist attempting to leave the vehicle, who it quickly disintegrates, before destroying an army vehicle that had accompanied Russell. Major Huglin took a rifle and confronted the alien, killing it before it could fire on him or the weapon. Russell and the others investigated the alien's body, finding that its armor was very light and removing its helmet to expose its true form, before the aliens' body faded away.

Above the Humans, a bomber was called in to take out the alien ship, with the gunners firing on the flying saucer. The bullets dealt no damage to the ship, which promptly destroys the bomber with its disintegration ray. The saucer then destroys the lab, firing on the forest to flush out the Humans, lighting most of the trees aflame. However, the Humans evaded the saucer, prompting the ship to jettison General Hanley and the police officer, who were no longer needed. Russell and his surviving companions made it to another secure location, where Human scientists analyzed the alien life support armor, retrieved from the burned-out woods, finding out what the suits were made of and how they work. Using the suit's communications uplink, the Humans recorded and deciphered messages being sent by the aliens, including plans of attack to be timed with the positions of stars and planets in relation to Earth. In addition, the weapon was improved, making a far greater range of effectiveness. As the Humans thought up more anti-alien weapons based on the suit's sense enhancements, the aliens transmitted a message to Earth, ordering them to look to the sun, telling them of eight days and nights of meteorological convulsions following eruptions on the sun, after which all world leaders are to convene in Washington D.C.. The same message was translated into every Earth language and transmitted across the globe for twelve hours, going silent soon afterwards, when the sun flared up as said by the aliens.