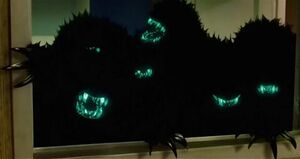 These are an unnamed extraterrestrial species which crash-landed on Earth through meteorite-esque cocoons.

These aliens are quadrupedal, having long legs (all four legs are the same length), armed with bear-like claws, rows upon rows of sharp fangs, having no eyes, nostrils, or ears to speak of, and communicate through sonar, shrieks, screams, snarls, and growls. They are also a sexually dimorphic species, the females being dog-sized and almost completely hairless, while the males being gorilla-sized and having a very thick coat of hair, so black in color it doesn't reflect any light at all. The males are also seen to have bio-luminescent "glowing" fangs - which were initially mistaken for eyes. Their blood is blackish-blue in colour.

It has been theorized that these aliens are invaders floating through space on solar winds, looking for a planet to "infest", and when the female finds a planet which is suitable, she excretes a musk-like fluid so the males are able to track her and then reproduce after landing on the planet, populating their new home. The fluid itself can be seen with ultraviolet light, although the males will relentlessly track anything with the fluid on it - including other living creatures.

One female of the species crash-landed in London, England during Bonfire Night - smashing a parked car near where a woman named Samantha was getting mugged by a street gang of teenagers - Moses, Dennis, Pest, Jerome and Biggz. While Samantha escapes, Moses investigates the wreckage of the car; the female aggressively scratching him across his face before trying to escape. Angered, the boys corner the female, with Pest disorientating/injuring her with fireworks before the gang beat the female to death.

Taking her body as a trophy of sorts and hoping to make money from it, the teens head back to their home at a tower block called Wyndham Tower, where they convince a cannabis dealer called Ron and his boss Hi-Hatz to store the female's body in their fortified weed room at the top of the block. Unfortunately for all involved, the female has secreted a fluid on several people who have come into contact with her - including Moses and Hi-Hatz - with the alien males beginning to rain down on London.

The boys soon notice the meteorites raining down and decide to get 'tooled up' to go and hunt the other creatures - believing it to be a full-scale alien invasion of London. Heading out together - with one of the gang bringing his dog Pogo along at the request of his parents - the boys discover to their shock that the meteor 'cocoons' carrying the creatures are three times bigger than the one carrying the creature they killed earlier. The danger becomes real when Pogo escapes off his leash to attack a creature in the park and is killed, with the boys fleeing when the alien appears and pursues them. They initially escape, but Moses is captured and arrested by the Police for the earlier mugging, with Samantha in the police van.

Unfortunately, the officers are attacked and killed by one of the creatures, with the gang hijacking the Police van to get away, with Samantha still inside. Heading back to the block, they accidentally crash into Hi-Hatz car - with Samantha getting away from the gang again. As Hi-Hatz threatens to shoot the teens, one of his gang members is attacked and killed by one of the aliens, allowing the teens to escape while Hi-Hatz kills the creature by shooting it. Pursued by more of the aliens, Biggz is separated from the group and ends up trapped in a bin with one of the aliens relentlessly patrolling and attacking it when he tries to get out. The rest of the teens make it inside the block, although Pest is bitten badly on his leg by the alien before they make it inside.

Seeking shelter, the boys coincidentally take refuge in Samantha's flat, with a tense moment between her and the teens as she initially refuses to believe their story about the aliens (thinking that they were large dogs that the boys set on the Police) before reluctantly tending to Pest's leg due to being a newly graduated nurse. While treating his wound, one of the aliens tracks them down and smashes through the door - with Moses successfully killing it by stabbing it with a Samurai sword. Seeing the boys were telling the truth and realizing that she will be safer with them due to her flat door being destroyed and with more of the aliens prowling around, she joins the group as they continue through the block. Along the way, the group encounters two gangsta-wannabe children - Probs and Mayhem - who the group tell to head back to their flats due to the danger. Despite this, the two children manage to kill the alien attacking Biggz by spraying the creature with a water gun filled with petrol before setting the creature on fire.

Retrieved from "https://aliens.fandom.com/wiki/Alien_(Attack_the_Block)?oldid=176068"
Community content is available under CC-BY-SA unless otherwise noted.