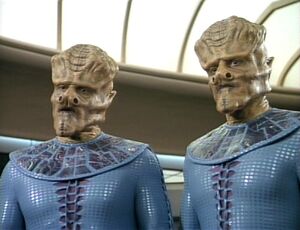 This is an unnamed species of sapient humanoid aliens. Individuals of this species are all physically identical and mentally linked to each other in a collective hive mind.

Because there are no differences between them and all individuals are linked, the concept of authority (of one person over another) is completely alien to this race, as is the concept of morality. They also believe that their telepathic form of communication is superior to verbal language, which they consider primitive and crude. They further claim that their species couldn't withstand captivity.

Retrieved from "https://aliens.fandom.com/wiki/Alien_(Allegiance)?oldid=138206"
Community content is available under CC-BY-SA unless otherwise noted.