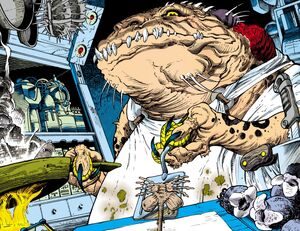 This is an unnamed species of sapient, gigantic reptilian aliens, and notable for being one of only two known species which consider facehugger flesh a delicacy; the other being the Reapers.

Retrieved from "https://aliens.fandom.com/wiki/Alien_(Aliens:_Taste)?oldid=161574"
Community content is available under CC-BY-SA unless otherwise noted.