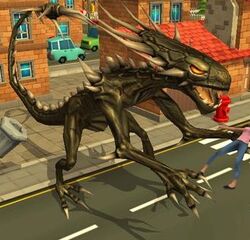 JellyfishGiant
This unnamed Alien is a large predatory creature.

The alien is a very large saurian-like creature that holds a close resemblance to the Xenomorph. Its arms and legs are long and thin, each ending in three-clawed hands and feet. Numerous spikes dot its body; one set on the elbows, two short sets on its shoulders, and a long line of spikes along its back down its tail. The tip of said tail ends in a spiked ball. Its head is made up of a rounded snout with sharp teeth, and a large frill lined with long spikes. Its body is covered in dullish bronze scales.

The alien is extremely hostile, and very destructive; destroying numerous objects and killing creatures with little to no provocation. Even the youngest aliens are strong enough to toss a large car, and they have a natural desire for meat.