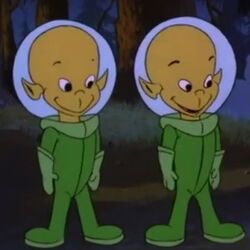 These aliens represent an unknown species of short-statured humanoids with yellow skin and disproportionately large heads. They seem to require spacesuits to survive on Earth.

Two members of this species came to Earth in a flying saucer and landed in the woodlands at night. The aliens came out of their craft in search of an earthling to abduct, and found three campers asleep: Scooby-Doo, Scrappy-Doo, and Shaggy Rogers. The aliens abducted Shaggy, but Scooby and Scrappy woke up in time to follow them and, venturing into the ship, eventually managed to rescue him. The two aliens reacted with surprise, as they had assumed that earthlings would be friendly, and departed from the planet.

Retrieved from "https://aliens.fandom.com/wiki/Alien_(A_Close_Encounter_with_a_Strange_Kind)?oldid=154315"
Community content is available under CC-BY-SA unless otherwise noted.