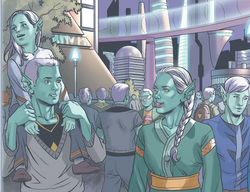 The Orville
The Alibar are a species from the plane Alibar.

Internal Alibaran biology are significantly different from human, though physically they are blue turquoise skinned humanoids with fin-like ears.

Twenty years prior to the Krills' historic peace treaty with Planetary Union in face of the Kaylon threat, the Alibar were members of the Union, but due to a change a leadership pulled out of the inter-species alliance and recalled all members of its kind to their homeworld.

Later the Krill had suspicions that the Alibar were building a weapon of massive proportions. Their world being close to the Krill homeworld, a fleet was dispatched to destroy the threat. The U.S.S Orville captained by Edward Mercer intercepted the fleet and after being told the situation convince their allies to hold off on the attack until the Union ship could properly investigate it.

When the Orville sent agents to the Alibar homeworld, what they found was a society that had revert to a more backward age. The moneyless economy was nonexistent and Alibar were using currency and poverty was rampant. Furthermore its leadership was espousing xenophobic propaganda, brainwashing its citizens that other aliens were the cause of their downfall, and promising to herald Alibar into a new age of prosperity with the launch of what the Union found to a giant celestial weapon.

The weapon turned out to be a quantum reactor that would separate the Alibar system from the galaxy, effectively placing a wall around Alibar into complete isolation. The device worked, but the Krill fleet that was dispatch to destroy the device were caught in the blast zone, thus stranding them in a new reality with Alibar as the onlly inhabited system. Seeing that this was a new universe, the Krill fleet resumed their holy mission to purge all non-Krill.