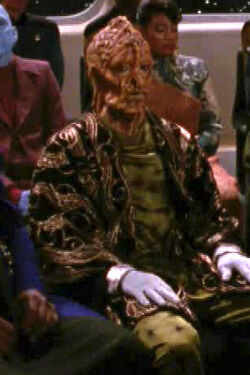 Algolians are a sapient species and presumably one of the member races of the United Federation of Planets, given that at least one individual of this species is a member of the Federation Archaeology Council.

They're a humanoid race with wrinkled, reddish brown skin. The Algolian ceremonial rhythms can be considered annoying to the Ferengi. The name of this species suggests that their homeworld might be orbiting the star known as Beta Persei, a.k.a. Algol.

Retrieved from "https://aliens.fandom.com/wiki/Algolian?oldid=126556"
Community content is available under CC-BY-SA unless otherwise noted.