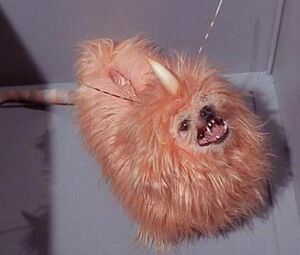 Same as a small dog

Alfa 177 canine is the name given to a species of small mammalianoid creature native to the mysterious planet of Alfa 177. These creatures are small and have their bodies covered in golden-colored fur. They are remarkably similar to some domestic dog breeds of Earth, but have a horn on the head, a row of spines on their back, a scaly tail and a pair of extremely thin antennae. Their homeworld of Alfa 177 is known to be a fairly inhospitable planet, with night-time temperatures reaching 120º below zero, which could be an explanation for the canine's dense fur covering.

The extraterrestrial Trelane was known to have a stuffed Alfa 177 canine head in his mansion in 2267.

In 2267, a specimen of this species was brought aboard the NCC-1701 USS Enterprise. In the process of doing so, however, a transporter on board was infected with yellow magnetic dust from the planet's surface. Soon afterwards, they unwittingly attempted to beam the creature back from whence it came. The dust caused some form of malfunctional disturbance however and the dog rematerialized as two separate beings: one, very gentle and shy; the other very angry, dangerous and aggressive. Biting anyone whom came near to it, this second canoid had to be restrained by being thrown into a box in the Enterprise's transporter room until said transporter was back on-line.

Believing they had properly fixed the device, the crew attempted to reintegrate the two canoids into one being again, solving the issue they had inadvertently caused. Unfortunately their attempt was in vain, as the dog-like beast was beamed back, but complications with the reintegration process killed the creature(s).

Retrieved from "https://aliens.fandom.com/wiki/Alfa_177_canine?oldid=163757"
Community content is available under CC-BY-SA unless otherwise noted.