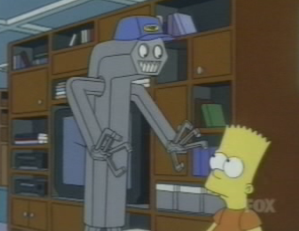 Alan Wrench is a metallic-based lifeform who was found in a meteor that crash-landed on planet Earth. He currently works in a Swedish furniture store in Springfield. Virtually nothing is known about this alien's homeworld and biology, except that it has a strong biological need for tungsten.

Retrieved from "https://aliens.fandom.com/wiki/Alan_Wrench?oldid=200078"
Community content is available under CC-BY-SA unless otherwise noted.