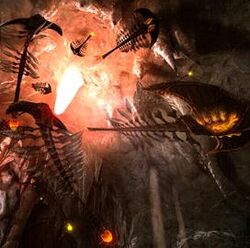 Lost Planet
The Akrid are a diverse group of arthropodic/reptilian, psychrophilic extremophiles who naturally inhabit the frozen, snow-covered lands of E.D.N. III.

The Akrid are a diverse group of animals that are split into a variety of highly-specialized variants, all of which will aid one another in combat. Although they seek thermal energy, they will not attack other Akrids for it. Each variant of Akrid seems to be completely incapable of breeding with one another—it is currently unknown if this is due to a centralized brooder or not.

Able to fly, these Akrid are weak on their own but attack in swarms to overcome their opponents. Trilids remain docile until an enemy strays within their radius, and then each in turn initiates a spinning dive attack on the targeted foe. Because they congregate in swarms, seek out the nest located high up on a wall or a cliff and eliminate it before concentrating fire on the Trilid themselves. If you would need Thermal Energy, you would want to attack the Trilid, and gather an unlimited source of Thermal Energy. Their weak spot is on their tiny heads. (To gain the most thermal energy from this creature, shoot it's tail.)

The Sepia were the very first Akrid to be encountered by the Humans after they had emigrated to E.D.N. III. Like the Trilid, Sepia move in generally-large packs, and are spawned from hives. They are adept at climbing, and will attack a foe from any and all angles. three main species of Sepia are found on E.D.N. III, the common Sepia, the explosive Bolsepia and the Sydsepia. Changes to the Sepias were few between the games, however the major change was that the Sydsepias were suddenly twice the size of their cousins and instead of ballistic bullets they spit annoying sticky bullets and were very durable (sometimes entire magazines were required to put a single Sydsepia down).

Extremely hard outer shell forms nearly indestructible armor. Attacks by curling into a ball and rolling into or over foes at high speed, or uses large pincers for stomping or crushing. These can be taken out easily, by using explosives on the tail, where you can see the thermal energy glowing (this is their weak spot). This species is playable in Akrid Hunt mode.

Dongos are relatively weak, presenting a fair challenge to new players and those who play with limited knowledge of Lost Planet's control scheme. Despite this, Dongos can grow to be quite the annoyance than the fun mess-around-with-me type of enemy, especially when encountered in large numbers as they can spam the player with multiple rolling attacks.

Godons are category G Akrid that are a sub-species of Dongo. They have large, glowing red spikes on their bodies and flexible mandibles which they use to bite. The weak spot is the same as the Dongo. The Godons are also thrice the size of a Dongo. This species is playable in Akrid Hunt mode.

This long-legged groundbuster is extremely aggressive. Upon sensing thermal energy traces from any living being other than another Akrid, it immediately attacks the source as a threat that must be eradicated. Once in attack mode, the Chryatis won't stop until all traces of thermal energy are gone. Its weak spots can be found on the abdomen and on the appendages. This species is playable in Akrid Hunt mode.

An interesting side note of the Chryatis is that their mouths split up the entire length of what normally appears to be just a long neck, making them capable of taking giant bites out of victims.

A sub-species of Chryatis that is covered in armor. Its weak spots are at the same spots as the Chryatis. The Gorechryatis is also huge, about four times the size of a typical Chryatis that can spit thermel energy . This species is playable in Akrid Hunt mode.

A scorpion-like Akrid that has a hidden stinger on the tip of its tail. Its weak points are on the stinger and tail. This species is playable in Akrid Hunt mode.

The Jellon are medium sized Akrid that, like the Trillid, travel in swarms. These Akrid resemble huge jellyfish and explode when dying mutations and variations of this Akrid exist. In Lost Planet 2 these Akrid are also adapted to living under water. the weak point is only visible while the Jellon is reproducing.

The Defloma can be encountered in the sewers or under water caves. The defloma is an octopus like relative to the jellon except this akrid is far more vicious than the jellon. They travel in pairs which makes them hard to kill. The weak point is where the mouth is, which is underneith the body. One of the only ways to detect this weak spot is when it is charging at you, or is about the eat you and/or a teammate.

This Akrid resembles a massive sea snake, that swims in pairs. These akrids weakpoints run along the back of their backs and die when most of the T-eng spots are destroyed.

Often called the Trillid of the sea, they are thought of which in the way they travel in packs, and use small fins to move about. Once shot, the Pirahna explodes, dealing minor damage.

These Akrid thrive by absorbing trace amounts of Thermal Energy from the ground. They spread seeds by shooting off the hard thorns from their tops. The seeds in the thorns embed themselves and use dead matter to grow and spread. Its weak spot is on top of the stalk.

This Category G Akrid has tentacles that act as a sort of radar, allowing it to easily pick up on the movement of Vital Suits from miles away. The most mysterious of all the Akrid, not much is known about these giant creatures. They have several weak spots covering the sides of the body.

The Debouse are a pair of reptilian-esque Akrid that hunt in pairs. using their large, floppy "ears", they unleash sonic waves to act as a sonar then focus these sound waves into an incredibly accurate (and very dangerous) attack. These Akrid have two cores in the open, the large core on their bellies, then the small "helmet" on the top of their heads. Shotting the Debouse in the heads tends to do more damage but is harder to do as they go after any noise and shooting them, of course, makes a LOT of noise.

Debouse pairs seem to prefer the hotter climates of E.D.N. III as they are seemingly only encountered in the deserts, (alongside some very pesky sandraiders that shoot pretty much only carry sniper rifles). Tactics for taking down a Debouse hunting pair should include a concentrated effort of the entire team on a single one then mop up the second as fast as possible.

A much more big version of the Tencale fought in the first Lost Planet game.The weak points are the same except its much more stronger and faster than its smaller counterpart.It can be defeated by using the overland battle ships laser cannon.

This is a VS/Akrid hybrid created by NEVEC.It sports NEVEC VS turrets on its back and underside.

This Akrid is much like the Neegal except it has NEVEC made battle gear which protects his weak points.Its attack are the same as the natural Neegal plus NEVEC turrets.

This Akrid is a Dongo with battle armor and a turret on its back.Its weak points are covered with NEVEC battle armor making it harder to kill.

This Akrid can be encountered in both Lost Planet games with the same attacks.It is also known as a queen gorechryatis due to it being a full mature female gorechryatis.

This category G Akrid was featured in the Lost Planet 2 demo, where it is described to be the largest Akrid yet encountered. It will attack its prey with its tongues, tail, feet, and a powerful electrical attack. Its weakpoints are located on all six of its legs, the spikes on its back, and inside its mouth. Another weakpoint is inside the body of the Akrid at the core; it can be reached if the player is eaten or climbs into the salamander's mouth. This Akrid is different to most other Akrid because it has flesh and an internal skeleton.

This Akrid is also known as a Space Akrid. It is the boss of Mission 02 in Lost Planet 2. The Akrid X was spotted by the NEOS orbital satellite cannon as it entered it's way into E.D.N. III's atmosphere. It can also regenerate any part of its body at will, shown when the railgun blows its head off its body. It's weak points are the reforming head and its glowing arm.

During its battle Akrid X displayed incredible regenerative abilities that surpassed the Harmonizer device that had become widespread and commonplace on E.D.N. III, making it a very tough opponent to subdue. Also, it showed an affinity for fire based attacks that could hit the player anywhere and everywhere on the map, with either massive splash damage or an attack that went straight through walls of solid stone and even buildings.

Notable features of Akrid X were its many "horns", the large and quite rigid wings and the multiple sgemented mouth (which was the main reason that its head had been blow clean off as it had been in the middle of attempting to eat the Railway Gun's cannon)

A massive category G Akrid and is encountered in mission 03 in Lost Planet 2. This akrid is in many ways just like the green eye due to the eye spots on the side of its body. It's weak points are the spots running down it's body and the inside of its mouth there are many ways to kill the red eye by either using the massive railway gun, gun batterys, ospreys, and the rear cart missile cannon. This akrid is considered a cross breed between an Undeep and the Green Eye. One must note, however, that the Cat-G Akrid known as Red Eye is quite possibly the largest Akrid in existence, discounting the city sized Over-G Akrid. It is unknown if this is in fact a new species or simply a truly ancient Akrid that had been dormant for many years prior to the arrival of Humans to E.D.N. III.

The largest known Akrid on E.D.N. III, it serves as the final boss of the game.

Known widely as the "Over G", this massive, city spanning Akrid is among the largest and most powerful opponents seen in the game (much to many peoples' annoyance). Based entirely within a city, speculated to be the Waysider's home, the Over G Akrid is a globulous mass of black-grey matter or it might be a gennessa of massive proportions unknown what the over Gs final form is it appears to have a gennessa type body structure, bright orange cores and Genessa that are far larger than normal. It is unclear as to why the Over G appears, but speculations point to it being some form of breeder Akrid that all Akrid respond to, as evidenced by the trillids that swarmed against NEOS as it was plummeting through the atmosphere and crashing into the Over G. 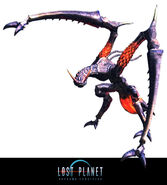 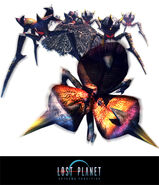