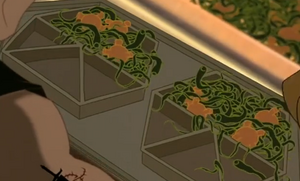 Also known as ET meatballs by the Humans it was a creature’s used as meatballs by the alien cook on Tau-14. mixed with red sauce the Cook had concocted as a dual Human/nonhuman delight known as Akrennian Beetle Sushimi. According to humans the little critters weren't too bad when well-cooked, kinda crunchy and salty. Usually served with a green derivative of noodles that are hollow, like tubes, and seemingly alive as it is seen moving on its own, and a sauce made from pre-digested Caldroch droppings.

Retrieved from "https://aliens.fandom.com/wiki/Akrennian_Beetle?oldid=177090"
Community content is available under CC-BY-SA unless otherwise noted.