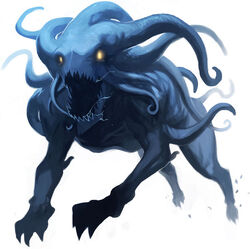 Pathfinder
Akatas are alien predators native to the Diaspora (Asteroid Belt) of the Golarion system. They are also known for their gruesome, parasitoidic reproductive methods, unlike those of any natural creature.

Their flesh is rubbery, hairless, and dark blue in color. They have a "mane" of tentacles and two tentacles in place of a tail. Their eyes are small and yellow, and their jaws teem with akata larvae. Akatas are totally silent at all times, as they have neither lungs nor vocal cords.

As befits a space-dwelling organism, akatas have a number of strange abilities not found in planetary life. They are immune to freezing, poison, and disease, and are highly resistant to heat. Due to their adaptation to vacuum, akatas do not need to breathe, nor can they hear. To reach planets rich in life, they can hibernate within a cocoon spun of noqual, a light and crystalline metal, in which they can remain indefinitely. Most infamously, akatas can implant their larvae in victims of their bites. These larvae cause a wasting disease called void death, which ends with the victim being reanimated as a so-called "void zombie."

The specifics of akata biochemistry are not known. While they can eat more conventional life-forms, their biochemistry is notably different in some ways. The most important difference is their vulnerability to salt water, which burns them as though it were acid.

Akatas are exclusively carnivorous. As larvae, they feed only on humanoid flesh, and the single larva animating a void zombie feeds on blood, but adults are significantly less picky.

Akatas are native to the asteroid-ridden void of the Diaspora. However, they do not often feed there, and generally hunt on the more food-rich environments of planetary surfaces, which they reach by hibernating on comets and asteroids. They are commonly found on Eox, as it is close to the Diaspora, but can be found on other worlds as well, such as Golarion. Their hardiness and lack of respiration means they can live in virtually any sort of planetary environment or atmosphere.

Akatas are parasitoidic creatures that reproduce by infecting humanoids. Their bite can infect victims with hundreds of microscopic larvae spawned in their mouths; it is unknown if these larvae are produced sexually or asexually. If the victim is a humanoid, the larvae eat away at the host over the course of several days until it eventually dies. When this happens, the strongest larva crawls up to the brain and begins a period of accelerated growth lasting two to eight hours. It overtakes the brain and reanimates the body as a void zombie, growing a long feeding tendril out of the remains of the host's jaws with which to drink blood. After one to four weeks, the larval akata matures and crawls out of the body, likely consuming its former host as its first meal.

Akatas are not sentient and have the intelligence of animals; ergo their social structure is simplistic. Akata living on planets congregate in groups called packs or colonies, numbering up to thirty individuals. Sometimes these groups are led by particularly large akatas called akata princes. Since akatas cannot make any noise, they communicate only through olfactory and visual means.