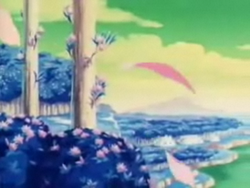 Dragon Ball
Ajisa is a species of tree-like plant-analog on Planet Namek. While the planet was once teeming with the trees, the crop was devastated by a giant storm in Age 261 that ravaged the planet and altered the planet's climate so drastically that nearly all Namekians perished (it is possible that this was an ice age). Dende described this scenario to Gohan and Krillin in Age 762.