Aiwhas were flying cetaceanoid organisms that lived on the planets Kamino and Naboo; while there were those who believed the aiwhas on Kamino to have been imported from Naboo, others speculated that this particular breed was entirely the result of cloning technology. They could use their wing-fins to either propel themselves through water or to soar through the skies. Kaminoans were sometimes derogatorily referred to as "aiwha-bait".

Majestic creatures that could take to the air, aiwhas could be found in the churning oceans of the planet Kamino, where they had been domesticated as mounts by the native Kaminoans. The creatures were strong swimmers, able to launch themselves from the cresting waves and then continue their momentum in flight. Aiwhas employed a water-vascular system that allowed them to control their relative density. When they needed to swim underwater, their spongy tissues absorbed water. When flight was required, they expelled this water and shed it to lighten themselves.

Aiwhas and similar creatures could be found on several worlds, including the planet Naboo, indicating that they were purposefully transferred by sapient species at some point in the past, as a creature of their size could not simply have accidentally 'stowed away'. On Naboo they lived in medium-size "pods," feeding on surface-dwelling krill-equivalents and the ichthyoids found in the huge Naboo lakes. Like actual cetaceans, aiwhas filtered food through the sieve-plates in their baleen. Like the Kaminoans, the Gungans of Naboo had also domesticated aiwhas, though in their case they were conditioned to accept mounts and provide airborne transportation. Gungans also used the aiwhas as war mounts, using them as reconnaissance and bombers. 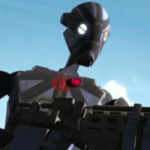