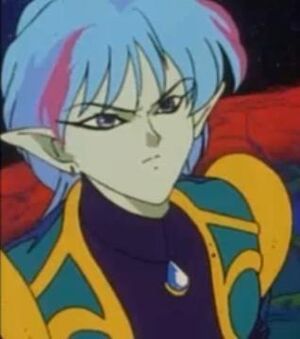 Ail is one of the two main antagonists during Makaiju/Doom Team arc of the second season of the original anime series of Sailor Moon R. In the English dubbed, his name is changed to Alan. He resides on the Makaiju and Juuban Odyssey apartments.

Ail and An invaded Earth to drain energy for the Makaiju and targeted the energy of humans, as they have the type of energy that the Makaiju needs. While they were posing as humans at Usagi Tsukino's school, Ail fell in love with Usagi. He kept this from An, while initially unaware that she was in love with Mamoru Chiba. However, they soon suspected each other in Episode 4, when An took Mamoru to the virtual reality game, and Ail caught Usagi when she fell off a platform.

In Episode 9, Ail began eating food with Makoto, which made An jealous, so she attacked them. This led to the arrival of the Sailor Senshi, and Ail and An sending Cardian Utonberino after them.

In Episode 10, Ail was disappointed that he was not Prince Charming in the Snow White play, and Usagi was not Snow White. He crashed the play (in which An was Snow White and Mamoru was Prince Charming) by sending Cardian Bipierrot to drain energy.

In Episode 11, Ail targeted Mamoru to drain his energy for An, who was losing energy while in detention with Usagi.

In Episode 13, Ail and An fought the Sailor Senshi, but Ail protected Usagi from the Makaiju. He soon came to realize that what they were doing was wrong, and was the first to truly realize the power of love, when he saw that Sailor Moon was in love with Mamoru. When An attacked the Moonlight Knight, the Makaiju whipped Ail with its branches and attempted to stab him, but An took the hit and died of her injuries. The Makaiju explained to Ail and the Sailor Senshi that it was not evil, and the energy it needed was love energy. After the Makaiju was healed by Sailor Moon, and An was brought back to life by the Tree of Life. Ail and An left with the Makaiju to start a new, peaceful life with it with the strong sister-brotherly love they had for each other.

Ail and An
Add a photo to this gallery
Retrieved from "https://aliens.fandom.com/wiki/Ail?oldid=168678"
Community content is available under CC-BY-SA unless otherwise noted.