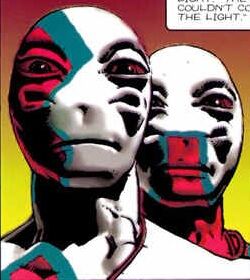 Clark Ashton Smith
Aihais are a sapient civilization from the planet Mars and biologically related to the extinct Yorhi race.

Aihais are tall, lanky angular bipeds, characterized by having massive bulging bellows-like chests and many-angled bony limbs, although the consistency of their arms and chest is often described as "spongy". Their skin is tough and leathery, and they can stand even the freezing nights of the Martian deserts with little to no protection. They have small oblique eyes, large flaring nostrils and ears. Their faces appear mostly inexpressive to Humans. Their hands have long, four-jointed fingers. Their blood is yellowish-red in color.

A subterranean population of Aihais exists in the underground caverns below the uninhabitable desert region known as the Chaur; and worship an unnamed entity. They differ from the surface Aihais by having white skin, completely devoid of pigments, and being noticeably shorter, averaging about 5 ft (~ 1.52 meters).

Aihais don't wear clothes, and require little protection from the elements, although they do wrap themselves in cerement-like folds of bassa-cloth when they sleep. Their attitude when Humans came to colonize their world was one of reasonable tolerance, and they soon started to trade with the newcomers.