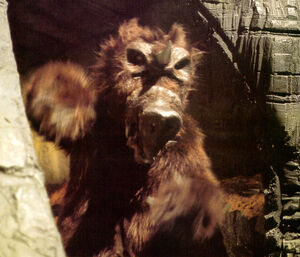 The Aggedor is a wild beast native to the mountainous regions of planet Peladon. They are large, bipedal mammalianoids simultaneously resembling a bear and a boar, with a single horn on the head. By the time of the Galactic Federation (around the 40th century) they were mostly believed to be extinct, but some still lived.

The ancient natives of Peladon viewed the Aggedor as a sacred animal and symbol of great power, to be feared and respected. The creatures can be domesticated and trained, and are susceptible to some kinds of music. The Doctor was once able to hypnotize one such beast with his watch while singing a Venusian lullaby.

Aggedors are viviparous and very long-lived: the gestation period in this species can last as much as a century.

Retrieved from "https://aliens.fandom.com/wiki/Aggedor?oldid=132117"
Community content is available under CC-BY-SA unless otherwise noted.