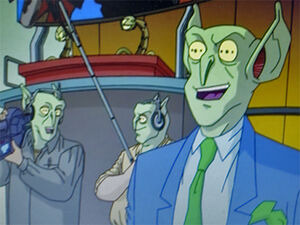 Unknown world in the G-Dan Galaxy

Men in Black
Agent X's species is a sapient, unnamed species of aliens hailing from the G-Dan Galaxy.

They're bipedal creatures, about the same height as the average Human, although Agent X himself appears to be a particularly tall specimen. They have green skin, bulging yellow eyes and large pointed ears, as well as digitigrade legs with large cloven feet.

They may not be carbon-based, considering that a Barooga, when feeling the biological urge to consume carbon, will go after Humans, but not after this species. Agent X has remarked that the Barooga is a "crude" creature that hasn't developed a taste for his species, so it's possible that they might still be carbon-based, but have a different chemical composition that the Barooga considers unpleasant (although it's equally possible to interpret the statement as meaning that they're made of something more "sophisticated" than carbon).

Very little is known about this species, except that they seem to have television and a kind of "celebrity culture" that's very similar to Earth's.

Although Agent X is known for his superior attitude in regards to his own race, this may not be shared by other members of the species. It's clear that the TV crew belonging to this race holds Human M.I.B. agents in high regard, particularly Agent K, and don't seem to consider themselves superior to Humans in any aspect.