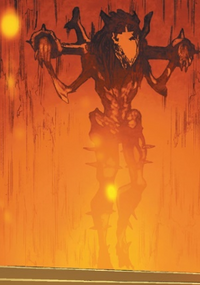 Aethion is an Elder God in the Dissension Universe.

Aethion was an early creation of the Creator that was imprisoned on a distant world. Though his main body was enchained, he was still able to use his mind to influence the native inhabitants of the world. Without any form of spiritual guidance the entire world became his to control. Aethion would later meet others in exile from the Creator. The Syndicate unaffected by his power, offered him his freedom but Aethion rejected it knowing that his chains could not be destroyed by the likes of them. However upon learning that they wished to bring ruin unto Heaven, he agreed to join their cause in bringing the Apocalypse to Earth.

Aethion was a powerful entity, able to place an entire species under its thrall on a planetary level. However its main body was seal with chains that even immortals could not break, thus making it use a cadaver as a puppet to communicate.

Retrieved from "https://aliens.fandom.com/wiki/Aethion?oldid=137776"
Community content is available under CC-BY-SA unless otherwise noted.