Ben 10
Aerophibians are a species of manta ray-like aliens from the oceanic planet Aeropela.

Aerophibians are humanoid manta rays with yellow or orange horns that are connected to their mouths, lizard-like tails, and membranous wings that are yellow in the front and either red or yellow in the back. Their hips have markings that resemble gills, and they have a black zigzag pattern around their upper torso that sometimes has a yellow outline.

Although they traditionally have red skin, Aerophibians can come in other colors. For example, Benjamin Franklin's Jetray has blue skin.

Using their membranous wings, Aerophibians are capable of flying at the speed of sound, and can maneuver through the air with little to no flapping. They can accelerate to speeds greater than light with ease, allowing them to enter hyperspace.

Aerophibians can fire powerful laser-like "neuroshock" blasts from their eyes that are powerful enough to cause pain to Pyronites, Vaxasaurians, Sonorosians, Amperi, and hybrid Terroranchulas. These blasts come in different colors such as green and red.

An Aerophibian's neuroshock blasts are mostly used to hunt prey and as self-defense. They are also capable of generating fire.

Aerophibians are highly adaptable to the point of being an all-terrain species, as they can breathe underwater and survive in the vacuum of space.

Aerophibians are durable enough to withstand being shot at by a fighter jet. For Omni-Kix and Omni-Naut Aerophibians, their natural durability is increased thanks to their respective armors.

In addition to their eyes, Aerophibians can fire neuroshock blasts from their tails. They can sometimes charge their attacks in a way that leaves a glowing green trail while flying.

Aerophibians possess enhanced strength, allowing them to carry Human children on their backs. This strength extends to their prehensile feet and tail, as they can carry a Vaxasaurian at base height without being weighed down.

Aerophibians are immune to electricity, such as that generated by Amperi.

Aerophibians have enhanced balance, as they can land their two feet perfectly once they are finished flying.

Aerophibians are heat resistant, being able to withstand a Pyronite's attacks. Similarly, they can withstand radiation, such as that generated by a Prypiatosian-B.

Omni-Kix Aerophibians can use their metallic wings as melee weapons or battering rams. Their wings can also transform into giant shields.[1]

Omni-Naut Aerophibians gain added protection while in the vacuum of space thanks to their Omni-Naut Armor.[2]

An Aerophibian's eyesight is very limited, meaning they can only see things properly if they are very close to them.

An Aerophibian's nueroshock blasts are useless against biomechanical species such as Talpaedans, as well as Dimension 12 robots.

Aerophibians can be accidentally harmed by their own neuroshock blasts if they are deflected back at them by a mirror. Their neuroshock blasts can also be absorbed by either a Prypiatosian-B or an Insectoid's plasma balls.

Aerophibians are unable to fly in Ledgerdomain because its skies are unparallel to that of a conventional planet's. In general, young Aerophibians may have trouble flying straight at their age as older Aerophibians have no difficulty doing so.

There are limits to both an Aerophibian's conventional durability and electricity immunity, as they can still feel pain from either scenario. Technically speaking, hybrid Aerophibians are less heat resistant than pure-blooded Aerophibians.

Despite their enhanced speed, Aeropbibians are not as fast as Kinecelerans on the ground.[3]

Aerophibians are vulnerable to being hypnotized. 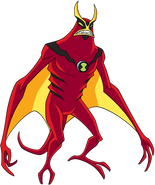 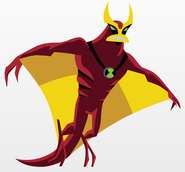 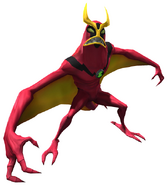 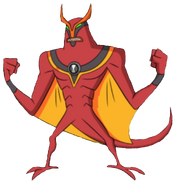 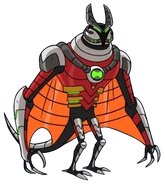 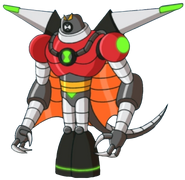