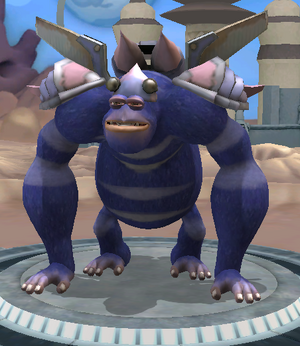 Spore
The Aepox are one of two affiliations or subspecies which evolved from the Apes. Since the two races are so similar in physiological appearance, they would have presumably split off from one group during their civilization, most likely after they reached technologies for interstellar drives due to the fact that they inhabit different systems.

Both subspecies are quick to anger, but unlike their sister race, the Apes, the Aepox spread themselves between zealous and simple warrior behavior whereas Apes fill the role of scientists. It can be presumed that this was the cause of segregation between the two subspecies. Since their cultures are so contrarily different, this would seem like the likely reason for their separation from one another. The Apes and Aepox are constantly at war with one another when in contact.

Apes (and by extension, the Aepox) were never the strongest of fighters, despite what their burly arms may lead one to believe. At the same time, however, they are not too particularly difficult to impress, either. In contrast to their size though they are quite capable of common sneakery. As culture began to take hold they became somewhat impressive dancers, although they would perform far more primitive dances, meaning it probably evolved as part of their blossoming societies.

Apes are known for their tempers, which does not serve them well as their only true method of attacking or defending against foes is a bite, which only utilizes weak jaw muscles. They cannot even run away well as their pride mixes with a slow gait and they are incapable of running. This is a confusing evolutionary strategy, but perhaps they would use their numbers to overwhelm or later on, outsmart foes.

Behind the scenes[edit | edit source]

Retrieved from "https://aliens.fandom.com/wiki/Aepox?oldid=178010"
Community content is available under CC-BY-SA unless otherwise noted.