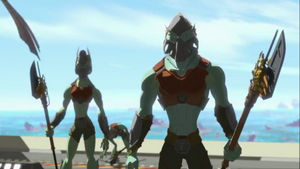 Star Wars
The Aeosians are an species from the planet Aeos Prime.

The Aeosian are tall green skinned humanoids with digitigrade legs. They are amphibious, capable of breathing water and air.

The Aeosians are primitive, ruled by a Queen and domesticate Krakavora.

Decades ago the Aeosians were allied with the Alliance to Restore the Republic and allowed the rebels to build a base on their world. When the New Republic was established the base was abandoned, however not forgotten, as the First Order began to target worlds that the old rebellion claimed to prevent they from being reused by the Resistance. The Aeosians were attacked in the crossfire, resulting in the death of their healer. When the fugitive Colossus arrived, the Aeosians seeing the vessel to be of similar design to a Star Destroyer believed it to be another invasion. However, after members of the Colossus provided medical aid to the Aeosians, their queen allowed the ship to make a home on their world.

Retrieved from "https://aliens.fandom.com/wiki/Aeosian?oldid=184231"
Community content is available under CC-BY-SA unless otherwise noted.