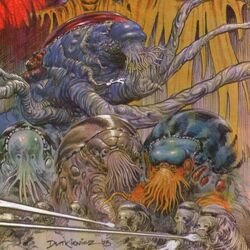 Lost in Space
Aeolians are a sapient, spacefaring species of grub-like gelatinous creatures which have colonized the Alpha Centauri System. They periodically shed their skin.

The Aeolians are the species which hired Dr. Zachary Smith to sabotage the Jupiter 2 expedition to Alpha Centauri in 1997.