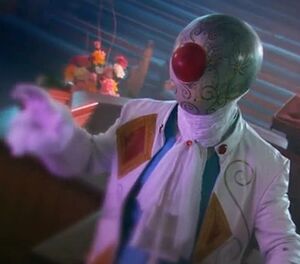 The Aeolians are a sapient spacefaring species which communicates with a musical language and are capable of generating destructive sound waves.

Once believed to have been wiped out by the Centaurian Catastrophe over a thousand Earth years ago; it was later discovered that at least one couple of Aeolians had survived and they were reunited in the year 2050.

The Aeolians are humanoid in basic shape, and about the same size as a Human. Their skin is light blue in coloration and their heads are almost featureless, save for a single round red eye with no pupil. They don't appear to have any mouth, nose, ears or hair, but they do have adorning patterns on their skin.

This species is most well known for its capacity to generate phenomenally powerful sound waves. Described as "masters of amplification"; female Aeolians produce a mating call when separated from their mates, which can be so devastating as to collapse buildings, provoke atmospheric disturbances in the form of hurricanes, and even annihilate stars and planets.

The average lifespan of this species appears to be well over a thousand Earth years, given that the survivors of the Centaurian Catastrophe were still alive in the year 2050.

Very little is known about the habits of this species, but at least some of them appear to be monogamous. Their technology is advanced to the point that they can pick up the mating call of their mates from over 10,000 light years away, and their spaceships are fast enough to cover this distance in minutes.

Retrieved from "https://aliens.fandom.com/wiki/Aeolian?oldid=182657"
Community content is available under CC-BY-SA unless otherwise noted.