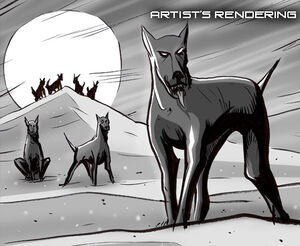 Desert (in the human world)

Dog-like monsters which can only enter the human realm in deserts, Adjules are natural enemies with Hive Monsters and their pheromones cause great discord among their victims, as opposed to the Hive Monsters' spawn's abilities.

Canine-like creatures with webbed feet and thick rough skin of crimson and blue tint. Whereas most monsters seem to appear randomly throughout the globe, the Adjule have the ability to only appear in desert locations and appear in packs of 4 - 13 at a time. Swift and complete removal of these creatures is important before their powers of discord overwhelm the area. Natural enemy is a Hive Monster.

Retrieved from "https://aliens.fandom.com/wiki/Adjule?oldid=181495"
Community content is available under CC-BY-SA unless otherwise noted.