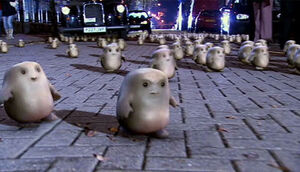 Doctor Who
The Adipose are perhaps one of the most peculiar sapient beings in the known universe, although all information upon their physiology is based upon evidence witnessed upon Earth.

At least in the case of those discovered on Earth, the Adipose were composed of sapient fat, and possessed two beady eyes and a small mouth.

A massive crisis arose when the breeding world of the Adipose was "lost" (it was stolen by the Daleks as a component of their Reality Bomb, and was later returned by the Doctor); without this planet they could not continue to breed. Because of this, they turned to Matron Cofelia to find the Adiposian First Family a suitable planet as a replacement. She chose Earth, directly disobeying the Adipose people who stated that it was illegal to use Level 5 Planets for such a procedure; to counteract this, she didn't tell them where she was operating.

To create the new generation of Adipose, she formulated a "diet" drug and, in the guise of the Human Miss Foster, spread this to the local sapient populace. This drug worked by galvanizing latent Human fat to parthenogenetically morph into new Adipose during the night, harmlessly lowering the fat content of their hosts each time they bud off. In case of an emergency situation, however, this process can be accelerated by using not only the host's fat, but also their bone, hair, and muscle tissues as well to create Adipose young, although this makes them ill and weak, and also kills the host by completely using up their body.

Fearing being discovered by the Shadow Proclamation, "Miss Foster" sped up the breeding process, and soon the number of Adipose children in London numbered several thousand. These slowly and cutely make their way to Adipose Industries, where the Adiposian First Family collect them in their spaceship. Likely due to her deceiving their people, they disposed of her simply by shutting down their tractor beam when she was in mid-tow, causing her to fall to her death. Luckily for the Adipose, The Doctor chose not to commit infanticide, as his former partnership with Martha Jones allowed him to act more humanly.

The newly created Adipose children were then taken into care by the Shadow Proclamation.

In one parallel universe, the Adipose incident occurred in America instead of the United Kingdom, as London was destroyed when the Titanic crashed into Buckingham Palace due to the absence of the Doctor. Because of this change, over 60 million Americans were killed in this alternate timeline - likely due to their increased fat content.

Retrieved from "https://aliens.fandom.com/wiki/Adipose?oldid=189819"
Community content is available under CC-BY-SA unless otherwise noted.