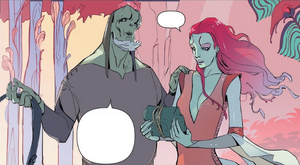 Artifact One
The Adenians are a sapient species from the planet Adenia.

Adenian society is at the level of the medieval age. They worship a pantheon of gods that they believed to have created to e world. The Akolouth are a group of clerics that maintain this ideology, assuming control over the kingdoms. Any deviation from their theology is seen as heresy and is as an affront to their gods and a threat to their power. Scientific advances in Adenia are thus hindered as many free-thinking alchemists, scholars and philosophers are hunted and ostracized from society.

Retrieved from "https://aliens.fandom.com/wiki/Adenian?oldid=160961"
Community content is available under CC-BY-SA unless otherwise noted.