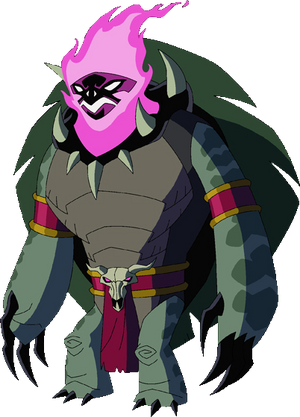 Like other Geochelone Aerio, Addwaitya resembles a humanoid turtle. However, unlike other members of his species, he has fiery pink energy surrounding his head, and claws instead of flipper-like arms.

Addwaitya is a powerful sorcerer, and was nearly invincible while using the Alpha Rune. Like ordinary Geochelone Aerio, he is immune to magic attacks.

Thousands of years ago, Addwaitya was a revered philosopher and mystic of his species. According to his people, he achieve godhood. However, in reality, Adwaita ascended into Ledgerdomain, where he discovered the Alpha Rune. Corrupted by its power, Addwaitya came to the belief that all living things were stealing his mana. Addwaitya summarily began to conquer Legderdomain and despite the attempts of several powerful sorcerers, he was unstoppable.

Addwaitya's rule over Ledgerdomain came to an end when Charmcaster, alongside Ben Tennyson, Gwen Tennyson and Kevin Levin came to the Alpha Rune. He was stripped of his magic, but swore to regain his power. Charmcaster led a resistance against him and eventually came to rule the dimension.

However, Charmcaster suffered a mental breakdown after the constant betrayals and became power hungry. She captured Addwaitya, turning him into a totem, stealing his magic. Addwaitya was later freed after Gwen and several other magic practitioners captured by Charmcaster created a counter spell that sealed her away. Once his captor was apprehended, Addwaitya vanished to parts unknown.

Addwaitya as seen in Ultimate Alien
Add a photo to this gallery
Retrieved from "https://aliens.fandom.com/wiki/Addwaitya?oldid=174259"
Community content is available under CC-BY-SA unless otherwise noted.