Alien Species
Register
Don't have an account?
Sign In
Advertisement
in: The Twilight Zone Universe, Humanoids, Extinct Species,
and 15 more 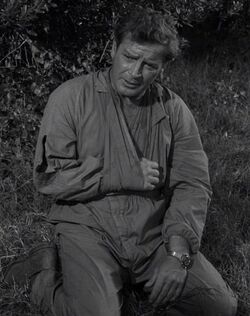 Adam's species are an ancient, unnamed, now-extinct Human-like species from an unknown now-destroyed planet about 4.3 light years away from Earth, and an ancestor of Humanity.

Adam's species appear completely indiscernible from Humans, and are known to live in an environment that has identical atmospheric conditions and gravity as Earth. While they are known to have a Human-like skeletal system, any other differences in physiology, such as organs, lifespan, and other differences in bodily functions are unknown, although they are presumably extremely close to Human physiology. They are genetically compatible with Eve's species.

Adam's species was known to have at least two distinct factions on their homeworld. These factions had enough of a rivalry to break out into war, and enough size or influence to make the conflict engulf the planet. Not much else is known about their society, but they appeared to have devoted almost all their resources to warfare, as they had no ship ready to rescue Adam. Their names appear at least somewhat similar to those of the modern Western world. Their timekeeping measurements appear the same as Earth, and they are known to use feet and miles as units of measurement, but it is unknown if these are equal to the modern customary or imperial unit. Their population, or at least that of Adam's faction, numbered at least half a billion. General Larrabee mentioned God to Adam, making it possible that Adam's species held a monotheistic faith, possibly the same Abrahamic faith later adopted by Humans.

Adam's species had developed weapons of mass destruction, capable of destroying the coastlines of landmasses within 12 minutes. The weapons were known to emit enough radiation to kill all life on a planetary scale, implying something nuclear. They were also able to create spacecraft capable of traveling across star systems, and had real-time communications between their homeworld and such spacecraft, even at vast interstellar distances.

Adam's species existed while Earth was still developing, and had entered an advanced industrial stage, but were divided into factions about to enter war. Colonel Adam Cook, an astronaut, was sent into space during this time aboard a craft registered as Probe 7, but went off-course and was forced to crash onto a forested area of the ancient and unnamed Earth. Most of his equipment was destroyed, leaving him with no way off of Earth, and his right arm was broken, preventing him from making repairs. Adam manages to contact his home base, but is given few words of encouragement, as the imminent war prevented them from having another ship ready to rescue him. They promise to send instructions on how to repair the ship, even though war was only hours away. The war soon came, with WMDs destroying the entire coastline of Adam's faction within 12 minutes. Adam is contacted again, where he is informed by a commanding officer, General Larrabee, that the base is to be abandoned soon, leaving him with no one to contact. Adam tries to go outside of his ship at night, finding unknown patterns in the dirt. He was then promptly knocked out by a rock, and while he was unconscious, he was contacted one last time, informing him that his species will soon be wiped out by the radiation from the WMDs, leaving no one to rescue Adam. Adam later awakes, reentering his ship and hearing a noise from within. Assuming that another being had boarded his ship, he left the ship again as a sign that he means no harm. With that, the other being, a female of another Human-like species, exits Adam's ship. Adam attempts to communicate with her, but they are unable to comprehend each other's language. However, they manage to use pantomime and dirt drawings to communicate, with the woman revealing her name to be Norda, and revealing that she is the last survivor of her own planet, which had left orbit. Stranded together, they prepare to search for food. Adam picks up a stick, which Norda took as a sign of hostility, prompting her to scratch Adam's face and run off. Adam is left alone, but when Norda returns, feeling remorse, Adam readily forgives her. They both head out to find food, entering a fertile area that Adam likens to a garden. Adam takes some dirt and asks what Norda called the substance in her language, to which she replies "Earth." Adam decides to officially name the planet Earth, and he and Norda exchange their full names, revealing Norda's first name to be Eve, before she sees an apple and offers it to Adam. Adam and Eve then began a new life on Earth. Their future descendants were known as Humanity, Adam's species ultimately left extinct.