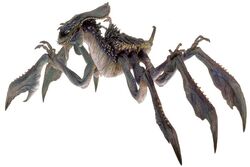 They have six sharp claws and tough skin, and are commonly found in gladiatorial arenas on worlds throughout the Outer Rim Territories. One planet where acklays were present was Geonosis, where they fought in the Petranaki Arena. An acklay was used in the attempted execution of the then Jedi Knight Obi-Wan Kenobi in 22 BBY, but was killed by him.

Acklays are also present on Felucia, where they attacked the 501st Legion during the Battle of Felucia, only to be wiped out by the clone troopers. The creatures could also be found on Lehon and the space station Burnout, among other places, often as combatants in gladiator matches.

The acklay is a three-eyed amphibious non-sentient crustacean native to Vendaxa. Though acklays live underwater, they can go on land to hunt, which they frequently do, as the lemnai, a creature that lives on the plains of Vendaxa, is their main source of food. As they resided in the oceans of Vendaxa, their eyes enabled them to see in darkness, although they were near-sighted. Despite their crustacean-like nature, acklays also had characteristics possessed by reptiles, such as their powerful jaws filled with sharp teeth. The acklay had a tough, leathery green skin, another trait from its reptilian heritage. Its belly was more vulnerable than other parts of its body, as the flesh covering it was not as tough as it was elsewhere. Acklays had a bony crest around their neck, used for both intimidation and protection.

These creatures have small stomachs, but are capable of expanding them when necessary. They had a high metabolism, which gave them substantial amounts of energy, but also caused them to starve quickly. Acklays were aggressive creatures, making them favorites in gladiatorial combat.

Each acklay had six deadly claws, used for both pinning an opponent in combat or slicing them. Their limbs were long, allowing them to strike at enemies from a distance. While their claws—actually fingertips covered by hardened skin—themselves had no feeling, hairs on their bodies allowed the creatures the sensation of feeling. These cilia also enabled an acklay to sense the body electricity of other creatures. The acklay's exoskeleton was strong enough to be used by some cultures as chitinous personal body armor. Although not high tech, it was occasionally used as a trophy item.

Acklays could be Force-sensitive, although this was extremely rare. Such creatures could teach themselves to use the Force and could fire Force lightning from their mouths.

During the Second Imperial Civil War, a type of aquatic vehicle called the Acklay Battle Fortress was used by Darth Krayt's Galactic Empire. In 137 ABY, Cade Skywalker and his companions encountered an acklay on Vendaxa, following Marasiah Fel's escape from Socorro. The acklay pursued its prey through a crash site, but was ultimately killed when Jedi Wolf Sazen and Shado Vao joined the fight, plunging their lightsabers through the acklay's chest.