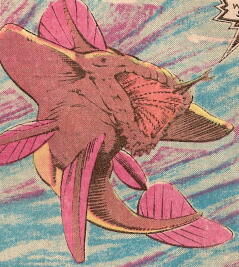 Marvel Comics
The Acanti are a species of sapient whale-like beings who naturally can float through space at a speed exceeding light. Many of them were enslaved by the Broods.

The Acanti roughly resemble whales of Earth. They are of a reddish-brown color, and possess dorsal, ventral, lateral, and caudal fins. Two green eyes adorn their head, widely spaced apart. They communicate with one another through vocalized sounds which they refer to as songs.

Upon migrating to the Milky Way galaxy, the Broods began to enslave the Acanti to take advantage of their natural ability to travel at speeds exceeding light. The Brood would infect individual Acanti with a disease known as the Slaver Virus, which would destroy the higher cognitive functions of their minds, making them ripe for easy control. Then, the Broods would transform the mindless husks into living starships. The Brood succeeded in enslaving the Acanti Prophet-Singer, and when he eventually died and crashed on a planet, its body was reconstructed as the "throne city" (presumably like a capital) on the planet (referred to as "Broodworld" or "Sleazeworld") that the Brood then established as the center of their empire. Thus, the Soul remained trapped in the skull of the dead Prophet-Singer even though a new Prophet-Singer had recently been born. With the Soul trapped, the Acanti suffered.

During the X-Men's first conflict with the Broods, the X-Men had been implanted with Brood eggs. The young Prophet-Singer encountered the desperate hero Storm as the egg began to hatch, transforming Storm into a Brood alien. The Prophet-Singer saved Storm (who had destroyed the egg and critically wounded herself). Other Acanti merged Storm's consciousness with that of the Prophet-Singer while Storm's body healed in a cocoon within the Prophet-Singer.

The X-Men then agreed to release the Soul from Sleazeworld. After a battle against the Brood, Binary succeeded in releasing the Soul from the crystalline room in which it was trapped. The grateful Soul purged the X-Men of the Broods embryos and transformed the Broods' Queen into inanimate crystal. The Soul united with the young Prophet-Singer, who assumed leadership of the Acanti.

Retrieved from "https://aliens.fandom.com/wiki/Acanti?oldid=180319"
Community content is available under CC-BY-SA unless otherwise noted.