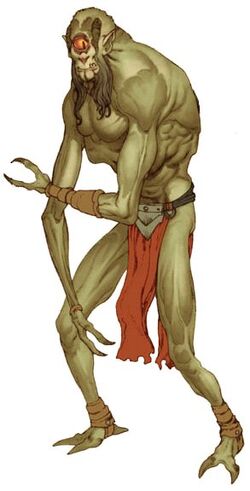 Star Wars
Abyssin are a species of bipedal sapients indigenous to the arid deserts of the planet Byss, in the galactic Outer Rim - not to be confused but often done so with another planet called Byss, located within the Deep Core in the same galaxy. They're often described by others as primitive and violent beings, and are often hired on as petty thugs, although they're found to be nomadic herders on their homeworld.

Abyssin stand around 2 meters tall on average, with much of their body length taken up by long limbs. They also possess a single eye that dominates their greenish-tan foreheads. It is because of this eye that they oftentimes gain the nickname of "monocs", "cyclops", or "one-eye", which the Abyssin themselves generally find to be derogatory, to the point where they will often react violently to being called thusly.

Abyssin possess amazing regenerative abilities, being able to heal quickly as well as actually regenerate any body part lost, which many believe contributes a lot to their especially violent racial culture, as they probably do not off-hand understand that most other species do not share this trait. This fast regeneration is believed to have been an adaptation to prevent fluid loss from bleeding, and because of these abilities, an Abyssin can live up to 300 standard years. Eventually however, an elderly Abyssin will lose this regeneration and either voluntarily exile themselves to die in the desert or be ritually killed by their tribe.

When two Abyssin tribes meet and both have plentiful water and food supplies, they will typically interact peacefully through trading. Otherwise, they begin a "blooding", a brawl which ends only when one tribe's warriors are all killed, captured, or incapacitated. Any warriors who survive a blooding are usually allowed to join the victorious tribe once they finish their regeneration. However, this tradition has led to some violent incidents when spacers tried to trade with Abyssin tribes with scarce water resources, especially since the Abyssins assumed the alien traders could regenerate as quickly as they did.

While many Abyssin are petty thugs, they are still an uncommon sight in the greater galaxy. Those found off Byss that aren't thugs are often slaves or mercenaries. Two notable locations that Abyssins live in significant numbers are the planets Phaeda and Dubrava.