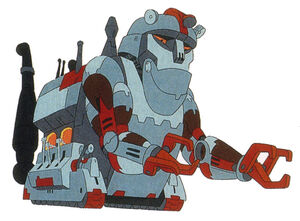 Fuel and moisture (to keep functional)
Droids (to add to mass)

The Abominor were an extragalactic collection of droids composed of tubing and salvaged parts from other droids, giving them an asymmetrical and presumably highly varied appearance, in direct contrast to their lifelong foes, the Silentium. Some members of their species grew until they reached planet-sized proportions. Because of the very nature of their construction, it is presumably impossible to determine what a typical Abominor looks like. Like their bodies, their culture was based on asymmetry and chaos. They are believed to have originated from the Yuuzhan Vong Galaxy.

Being massive constructs, they had problems with overheating due in part to possessing massive boilers filled with a fuel substance, and often relied on moisture that had to be drained away from a planet's lifeforms to cool off their internal machinery. Unfortunately, this process would often plunge the planets the Abominor was located on into a drought or famine, subsequently causing great hardship for the inhabitants. Abominors either had to or chose to utilize organic slaves in order to fill their boilers with fuel.

To add to one's mass, it lured in a harem of unassuming droids with luxurious living conditions, treating them to oil baths and other droid pleasantries until their eventual demise, where the Abominor would consume them to add to its own structure. It is unknown if the Abominors respected the droids who would become part of their body or if it was simply a clever ruse just for entrapping droids for its mass.

The Abominors and the Silentium fought for supremacy against one another in a massive, galaxy-spanning war, until their very galaxy became devastated by the conflict. Eventually the various remaining organics of the galaxy, having formerly been ignored by the two machine races, banded together and rose up against their unintentional oppressors. The combined organic might forced both droid civilizations to flee into the Unknown Regions of another galaxy where they each reestablished a foothold. Unlike in their own galaxy, they both attempted to keep out of the affairs of this new galaxy most of the time.

However in 15 BBY, a single agent of the Abominor, the Great Heep, moved inwards into the main sections of the galaxy and formed an alliance with the Galactic Empire. The Empire had him planted upon the planet Biitu, whereupon it immediately began to strip the planet of its natural resources. Eventually an adventurer named Mungo Baobab discovered that Heep was siphoning the moisture away from the world's farmlands, and seeing the native Biituians plunged into a terrible drought, he destroyed the machine with the help of R2-D2 and C-3PO. This ended the Imperial ravaging of Biitu.

Many years later a relative of Mungo's, Ebenn Q3 Baobab found the remains of Heep and using the clout and wealth attached to him, he restored the being in order to put him on display at the Baobab Museum of Science.

Retrieved from "https://aliens.fandom.com/wiki/Abominor?oldid=180782"
Community content is available under CC-BY-SA unless otherwise noted.