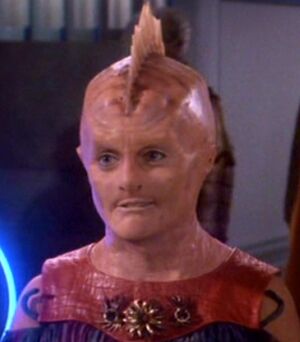 The Abbai are a humanoid race and were members of the League of Non-Aligned Worlds and are a member race of the Interstellar Alliance. They were one of the many races devastated by the Dilgar invasion, particularly the war criminal Jha'dur.

A humanoid amphibian, Abbai can be distinguished from other races by their distinctive fish-like ridged crest on the top of head (which is larger in females than males). They also posses a raised bone structure above the eyes and very pronounced cheekbones. Like Humans, Abbai have five fingered hands, though their feet posses no external digits. Their hairless skin is thicker than that of Humans, and comes in three basic ethnic groups, colored either pink, brown or red.

Being amphibious in nature, all Abbai can breath in both water and in an oxygen/nitrogen atmosphere. Air is inhaled though their thin nasal passages while water is drawn in though a series of gill slits in the torso.

Abbai reproduce like many other species through sexual coupling of males and females. Fertilization of a female Abbai is achieved through the intertwining of the tendril like genitals located on the inner thighs of both the male and female, the only outward distinction being that the male tendrils are somewhat thicker. Once impregnated, the female will carry the developing embryo for the equivalent of 8 Earth months. During birth, Abbai women submerge themselves in tanks of water and gently pass the child into the water through a birth canal located in the groin, much like that of humans.

The mother will feed her young through a set of small tentacles that fringe the underside of her bosom. While clothed, it may appear similar to human female breasts, though it is in fact a single large structure. Once fully matured, the average Abbai will grow to around 120 to 160 cm tall and anything from 70 to 120 kg in weight.

As a species Abbai have a low birth rate which has kept their level of population growth stable, though this can also leave them vulnerable to disasters such as famine and plague from which it can take generations to full recover from.

All Abbai possess a telepathic ability in the form of a very limited empathic sense, with which they are able to sense the feeling of other sentients, though the ability tends to be more pronounced in females.

The Abbai civilization dawned around the Earth year 3800 B.C. and is regarded as a model of tolerance and respect having eradicated all poverty and inequity. Although the Abbai are dominated by the female gender, this is simply a fact of Abbai biology that the females naturally outnumber males five to one. For their part, the males are in no way considered inferior and are able to participate in all areas of society, with the exception of the government itself. This arrangement seams to work as it has remained stable for over four millennia and most male seem more interested in pursuing artistic, scientific or academic professions over politics.

All Abbai prize cooperation, beauty, knowledge, philosophy and gentility and are a very curious people that enjoy meeting new races.

Shunning large settlement or cities, most Abbai prefer to live in small villages, built in or around water. As such there are only 10 large cities on Abba IV.

When it comes to recreation, the Abbai love games of all sorts, though they especially favor a card game known as "Mayagi". The rules of Mayagi are very flexible and constantly changing, as a result very few races but the Abbai are able to understand it.

As natural swimmers, the Abbai favor many aquatic sports as it is all but unheard of for an Abbai not to be able to swim. Though they have no contact sports the Abbai especially enjoy racing in all of its forms; including foot races, vehicles and anti-grav platforms.

To Abbai sex is considered a normal and healthy activity both inside and outside of marriage and so they have no concept of infidelity. Polygamy and bisexuality are the norm in Abbai society and they are open to coupling with just about any gender of any race with which they are anatomically compatible.

Abbai also love philosophical discussions and will frequently meet in groups and debate some concept or other. They are very fond of a type of a mildly addictive hallucinogenic narcotic called "Dinok", which is also used in religious ceremonies and is thought to be one of the reasons for their mild empathic abilities.

Religion is highly prized among the Abbai, as is tolerance and mutual respect. As such their sixteen distinct religious hold no rivalry towards one another. The most dominant belief system on Abba IV is Oulai, the worship of wind and water. Unlike most other races the Abbai do not worship divine being(s) but instead revere the natural elements (stone, sand, plants, mountains etc.) with the exception of Kolai; the worship of logic and knowledge.

Retrieved from "https://aliens.fandom.com/wiki/Abbai?oldid=173741"
Community content is available under CC-BY-SA unless otherwise noted.