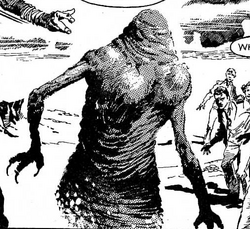 Planet of the Damned
The Ab-human was a creature native to an ab-world that can be access through the Bermuda Triangle.

Grotesque bipedal slime-like beings that appear rather faceless and eyeless yet seem to be able to perceive. They were able to spit out acid from some orifice. Alcohol has an adverse effect on them, as mere contact can cause them to combust.

The Ab-humans have displayed a sinister agenda towards the human visitors that appear in their world. Hounding survivors of such transfers from the Bermuda Triangle, attacking them with hostility. According to older veterans of the ab-world, they have a taste for human flesh. Though limited to walking afoot and stalking their prey, they have been shown to riding pteranodon creatures called Grots.