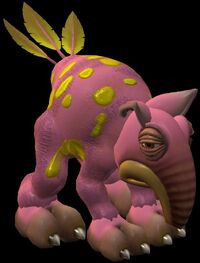 Small herbivores that live in the woodlands of Bilzac. They defend their nests with ferocity despite their size. They are closely related to the Boarmards and are very social. Aawkwaard have a strange set of tail feathers on their rumps, possibly for mating displays. At first, these tapir-like creatures appeared in a small group in a forest area, which the Screeble attempted to sneak up on to attack, but was forced to flee after they began to injure him too much.

Retrieved from "https://aliens.fandom.com/wiki/Aawkwaard?oldid=180633"
Community content is available under CC-BY-SA unless otherwise noted.