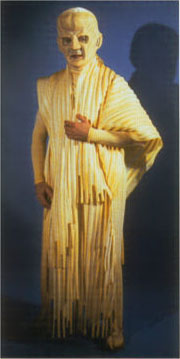 Aaamazzarites, also known as Therbians, are a species of arachnoid humanoids indigenous to the planet Aaamazzara and possibly also inhabiting a planet known as Therbia, perhaps where they were first discovered by the United Federation of Planets (which would explain why they would then later obtain the more proper name of "Aaamazzarite"). It can be assumed that they evolved with the aid of DNA traces left over by the Ancient Humanoids. They were not a common sight amongst the galaxy within the 23rd century.

Aaamazzarite bodies function similarly to that of Earth's spiders. They are noted for generating their clothes and even everything else they build such as furniture using a biological chemical which they spin from their mouths, building almost like bees with their hives.

Retrieved from "https://aliens.fandom.com/wiki/Aaamazzarite?oldid=163653"
Community content is available under CC-BY-SA unless otherwise noted.