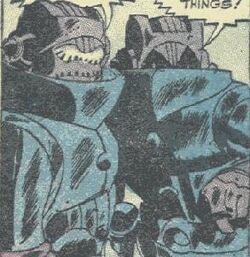 Marvel
The A-Chiltarians are a species of humanoid sapients which possess multi-faceted eyes, four-digit hands, three-toed feet and purple-grey fur covering the entirety of their bodies. Their culture remains tribal despite having reached the interstellar era, and they are mildly aggressive and temperamental. They are indigenous to the planet A-Chiltar III, the third planet orbiting the star A-Chiltar, known to the scientists of Earth as R Monocerotis. Despite the fact that their homeworld possesses a high quantity of methane in the atmosphere, it is apparent that they can somehow breathe in Earth's atmosphere, although it is possible that they wear specialized breathing apparatuses.

Retrieved from "https://aliens.fandom.com/wiki/A-Chiltarian?oldid=180317"
Community content is available under CC-BY-SA unless otherwise noted.