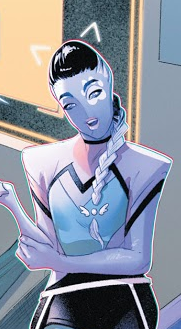 DC
The @At (pronounced at-at) are a Trilogy species from the City of Enduring.

Described as living search engines, the @At appear to be synthetic humanoids with vocalized voices.

Though they adhere to the Emotion Exploit, and being the ones that designed it, like the other Trilogy races, they seem to be prejudice against biologicals or meat-salads as they derogatorily call them. They are highly specialized in analyzing data.